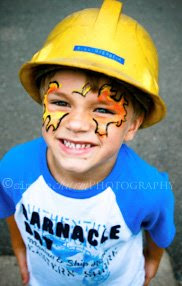 Let me give you a little history ...

Shortly before his second birthday, we moved him into his big boy bed ... and a new bedroom. In order to coerce him to stay in his new bed , we got him a little DVD player and let him watch one episode of cartoons before bed.

Why did we do this? I have no idea. Actually, I do have an idea. He was the worst sleeper ever. He rarely slept through the night and he hated his crib with a passion. A little DVD action was sure to keep him in his bed ... right?

Well ... turns out the DVD player was quite possibly the worst decision we ever made. Ever. Big surprise, huh? It was keeping him awake later than he should have been and the tantrums over him wanting another episode became more frequent.

So we took it away. Just like that. Mean parents, I know.

It helped. He began getting the sleep he needed and his behavior improved. Imagine that!

It was also around that time that I started researching artificial coloring in food and how it affects behavior in children. I was serious about it and decided to spend a few hours on a Saturday morning at the grocery store studying labels and finding alternative foods.

Red is the biggest culprit, so that is the one we focused on the most. And we continue to do so. If I tell Mason that he can't have something because it has color in it, he understands completely what I'm talking about.

Back in September 2008, Mason started preschool in a more structured preschool setting than he had been in previously. Since then, he has struggled a little bit with impulsiveness and appropriate behavior. These behaviors are come and go ... but like I said earlier, they are interfering with his functioning.

For example ...
Anyway ... Mason's teacher, Kyle and I have talked to him and worked with him and talked to him some more when he has behavioral problems. He seems to make positive changes ... and then suddenly we are back to square one. We have taken away his TV, his Nintendo DS and other special privileges. Sometimes I think he really thinks it is all a joke. 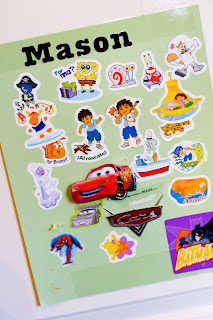 A couple months ago, I made a sticker chart for him at home. Whenever he listened well or was good at school, he would get a sticker. As soon as he earned 10 stickers, we would take him to buy a small toy. It really helped him ... for awhile. Granted, it sort of became old news after awhile.

I spoke with Mason's teacher last week and was informed that Mason was still having troubles on occasion at school. His teacher started giving the kids stamps on their hands at the end of the day if they had a good day ... and that helped him ... for a few days.

But I digress, the learning aspect is separate from his behavior ... actually it most likely is related, but in my mind I'm treating it separately. 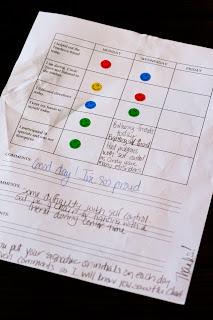 So our newest attempt to rectify his behavior is to use this daily chart at school. His teacher is on board with this and I am hoping he strives to get his stickers every day. We are only two days in and as you can see, he missed two stickers on day two. He did awesome on day one, but day two was a little different ...

I also am going to be doing something similar here at home. Some categories I am thinking of include ...
If he does the things listed in each category, he will get a sticker in that category. At the end of each day, he will get a dollar if he got all of his stickers for the day. If he didn't, then he gets nothing. I guess I'm still trying to determine if this is the best way to approach it.

My biggest questions all along have been ... Is this a boy thing? Does he have hyperactivity disorder? Attention deficit disorder? His pediatrician thinks it is a boy thing ... and I'm honestly not sure. Despite the picture this might paint, he really is a great kid ... he just has these quirks that come and go ... and I'm not sure I have the answers any more.
Posted by Bethany at 3:14 PM