The story of our baby girl... 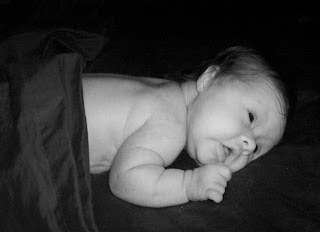 On January 7, 2006, Payton Lynn was born, weighing 7 pounds 1.5 ounces and measuring 19 3/4 inches long. She was a beautiful baby with a head full of hair, just like her big brother! Soon after her birth, our angel was diagnosed with Down syndrome.

Immediately after delivery, Payton was whisked away to the Neonatal Intensive Care Unit (NICU) for breathing problems. Once the doctors' suspicions arose that she may have Down syndrome, they did blood work and called in a cardiologist, since many babies with Down syndrome have heart problems. Her red blood cell count was high, as is fairly normal in Down syndrome babies, and we learned that she had a PDA, a small VSD, and her heart pressures were off. This, believe it or not, was great news, as her heart problems could have been much worse. The PDA is a blood vessel that is open in utero, but is supposed to close at birth...well Payton's did not close. The VSD is a hole in between her ventricles. We were told that this hole is tiny...pin-point size. Due to her pressures being off, the blood was shunting back and forth through these two openings, causing her to have to work harder to breathe. So, she was put on 100% oxygen assistance until the PDA closed...which it did, thankfully, after a couple days. Her heart pressures were getting better and eventually the blood quit shunting through the VSD, so we were able to wean her off of the oxygen. By day four, she was completely weaned and was doing great. We have been told that her VSD should close on its own with time, given how small it is.

The next step was getting her to increase her feedings and make sure she could hold her body temperature. She did fabulous in these two categories and was able to go home when she was seven days old. We were thrilled!

Payton was sent home on a 30-day dose of antibiotics, as her kidneys were also slightly dilated. The doctors did not seem too concerned with this, as they claim they see it often enough and that the dilation should go down. Well, we'll see. We will have another ultrasound on her kidneys to see if they are better.

Since coming home, Payton has adjusted great...we have all adjusted great. Mason adores his little sister and can't get enough of her. While we were initially heartbroken over our angel's diagnosis, we quickly came to embrace it. Sure, we cried our fair share of tears, but time heals the pain. We don't look at her and see a big DS on her forehead. Payton is just a baby, our precious little girl. She is no different than any other baby...all except for that fluke with her chromosomes. That does not change the amount of love that she needs from us, nor the amount of love and joy she gives us, and we hope that everyone else sees that too.

The Creed of Babies with Down Syndrome
My face may be different
But my feelings the same
I laugh and I cry
And I take pride in my gains
I was sent here among you
To teach you to love
As God in the heavens
Looks down from above
To Him I'm no different
His love knows no bounds
It's those here among you
In cities and towns
That judge me by standards
That man has imparted
But this family I've chosen
Will help me get started
For I'm one of the children
So special and few
That came here to learn
The same lessons as you
That love is acceptance
It must come from the heart
We all have the same purpose
Though not the same start
The Lord gave me life
To live and embrace
And I'll do it as you do
But at my own pace
Posted by Bethany at 4:51 PM 0 comments

Email ThisBlogThis!Share to TwitterShare to FacebookShare to Pinterest
Labels: Payton (aka: Chicky)

Last night they decided they didn't need to supplement Payton with oxygen and she took all of her bottles. They are slowly increasing the bottle amounts and decreasing her IV fluid. Payton has increased her feeding amounts quicker than they expected ... she is up to 60 mL, so the IV fluids will be gone soon. Thank God!

Payton got a washcloth bath today at 8:00 p.m. ... she was less than thrilled. Her belly button also fell off today and it looks as if it might be an outie.

Payton's bilirubin is down to five, which is great. The nurse is just waiting to receive orders to remove the lights. They are also weaning her from the warm temperature in the isolette and if she can hold her body temp, she will be in an open crib by this afternoon. Praise God!

Cardiology did an EKG this morning and we are waiting for the results.
Posted by Bethany at 10:26 PM 0 comments

This morning when we went to visit Payton, her feeding tube was gone. The nurses told me she actually had pulled it out ... feisty little thing! They hadn't needed to use the tube, so they left it out. The nurses also removed the nasal canula, as they have not supplemented her with oxygen since 11 p.m. last night, which had only been done as a precaution. She also is still under the lights for jaundice.

Pastor stopped by today and we had a nice visit.
Posted by Bethany at 8:21 PM 0 comments

Today Payton's oxygen was turned down from 30 to 25, per the cardiologist. They are trying to wean her, as long as she does okay. She is ... or she seems to be ... very lethargic today. She tuckers out easily when eating and falls asleep quickly. She hasn't been eating as much as the doctors would like, but she is also on an IV still and getting fluids that way. The doctors are also trying to wean her off of the IV. They told us they might insert a feeding tube if she doesn't eat as much as they would like, or if she continues to tucker out.

My nerves are shot today ... I'm very worried about her being so lethargic.

Payton's bilirubin count is down a couple of points today, but she is still under the lights so that her levels don't go in the wrong direction. She also is being continued on antibiotics, even though there are no signs of infection ... I'm told this is precautionary.

This afternoon, while bottle feeding, Payton sucked well, but forgot to breathe and couldn't keep up with swallowing. Her oxygen saturation fell and her lips turned blue ... luckily the nurse was in the room and was able to turn on an oxygen supplement quickly. The doctor examined her and said to give her oxygen while she feeds and to insert a feeding tube to give her whatever she doesn't take from the bottle.

At 8:00 p.m., I was able to nurse and they let me try without an oxygen supplement, as I think she does better on the breast than bottle. She did great! Prior to her 8:00 p.m. feeding, they had inserted the feeding tube.

I called at midnight to see how her 11:00 p.m. feeding went on the bottle. They said it went good, but they had given her an oxygen supplement. Despite this, she took the entire bottle with no problems.
Posted by Bethany at 8:12 AM 0 comments

The cardiologist came today and wants Payton left on oxygen for today, but wants the doctors to start weaning her tomorrow. On a side note, I was allowed to nurse twice today, with bottle feedings every three hours. Payton seems to be latching on okay, but doesn't last very long, nor does she seem to eat very much.
Posted by Bethany at 5:09 PM 0 comments

Excerpts From My Diary: Day One {Payton's Birth}

Around 3:00 p.m., we went to the hospital because I wasn't feeling well ... I had diarrhea all day and had thrown up. Upon arrival, I was having small contractions and was also very dehydrated. They gave me several bags of fluid to hydrate me and to see if the contractions stopped or if I was truly in labor. The contractions began getting stronger and around 10 p.m., the doctor broke my water. I was about 5-6 cm dilated at that point. By about 11:40 p.m., the baby had descended and we got ready to push. Payton was born at 11:52 p.m. after I pushed three times. She was having trouble breathing and wasn't turning as pink as they would have liked, so a NICU team was called in. Even after the NICU team gave her extra oxygen, she didn't get her breathing up, so she was taken to the NICU.

After awhile, the NICU doctor came by to tell us that Payton was breathing okay, but that she was on oxygen. The doctor also made a comment about her eyes being slanted upward and that there may be some things they need to look at ... but the doctor wanted the swelling from birth to go down first. I immediately knew she was talking about Down syndrome and asked about other signs. The doctor wanted to wait for the morning doctor to get there an d see what he thought, but I told them to go ahead and draw the blood for the chromosome test, because I knew she had Down syndrome.
Posted by Bethany at 4:50 PM 0 comments