So we've become hooked on fishing ... who would have guessed? Tonight we were out fishing late and I caught another huge catfish. The picture is horrible, but here is Jeremy holding the fish by its tail ... 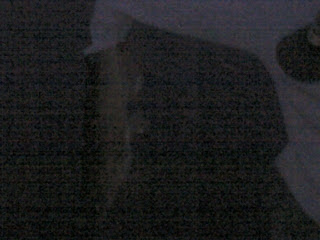 I received an award! 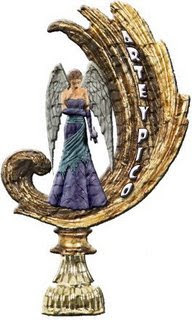 So I got an award for being such a cool blogger! LOL Christina over at Kwisteena's Kwaziness tagged me for this award! Thanks Christina!

The rules for this award are:
1. You have to pick 5 blogs that you consider deserve this award for their creativity, design, interesting material, and also contributes to the blogging community, no matter what language.
2. Each award has to have the name of the author and also a link to his/her blog to be visited by everyone.
3. Each award winner has to show the award and put the name and link to the blog that has given her/him the award itself.
4. The award winner and the one who has given the prize have to show the link of Arte y Pico blog, so everyone will know the origin of this award.
5. To show these rules.

I'm passing this on to:
Shay at Karl's Kraziness
Christina at Matt, Christina and Kylie
Renee at 3 Little Lady Bugs
Kim at Charlie's Up To
McKenna at Our blah blah blog

Payton is a little chatter box, in her own language that I sometimes can't understand. Some words I can understand, but I'm not sure that I have heard her put together a two word string, other than "NO NO".

This morning I was putting her coat on and in order to put her arms in the sleeves, she had to set down her baggie of Cheerios. Zoe, our dog, approached and sniffed her baggie. Then, clear as day, "NO DOGGIE!"

Yay Payton! I cheered for her and repeated her ... and of course, kissed on her!
Posted by Bethany at 9:40 AM 6 comments

Email ThisBlogThis!Share to TwitterShare to FacebookShare to Pinterest
Labels: Payton (aka: Chicky), speech 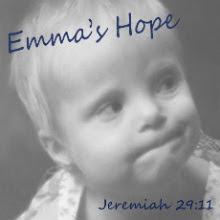 "For I know the plans I have for you," declares the Lord, "plans to prosper you and not to harm you, plans to give you hope and a future."
Emma is five years old and she spent those first five years of her life in a Ukrainian orphanage, spending much of her time in a crib. She was so weak that she could not sit unassisted at five years old. A little over a month ago, Ms. Emma was adopted and was brought to the United States by her adoptive family. Emma has Down syndrome, a major heart defect and severe pulmonary hypertension ... her adoptive family was prepared to have her heart repaired.

Soon after being home, Emma thrived. She began sitting unassisted in less than a month and has just done amazing things. Her family scheduled her visit with a cardiologist and Emma had a cath done last week in preparation of her upcoming heart surgery. After doing the cath, Emma's family learned that so much damage has been done that the cardiologist is not recommending surgery because he does not think Emma will survive. This news was a blow they did not expect. They obtained a second opinion and that cardiologist agrees, although seems to be of the mindset that they have nothing to lose by doing surgery, because her lifespan without surgery will be limited.

Please pray for Emma Hope and her family during this difficult time as they search for the answer. Click here if you would like to follow their journey.
Posted by Bethany at 8:17 AM 0 comments

Email ThisBlogThis!Share to TwitterShare to FacebookShare to Pinterest
Labels: adoption, down syndrome, prayer

My kids love each other

Payton adores her brother. She wants to be by him all the time ... and she wants to play with him and his toys. Although he has his moments of getting annoyed with her, he is tolerant of her most of the time ... and she is happiest when he is playing with her. Yesterday, the two of them played in his room for hours. No fighting, no tears ... just happy times. They laid every pillow in the house across his bedroom floor, watched cartoons and just hung out ... all by themselves. We are just hoping this sort of bonding lasts into the years to come!
Posted by Bethany at 8:12 AM 1 comments

Mason had his second soccer game this past weekend. He is understanding the concept more and more as he goes. He even scored a goal! It doesn't matter that it was in the other team's goal, does it?
Posted by Bethany at 8:11 AM 0 comments

So I love Super Nanny. I always learn something from Super Nanny ... even Kyle pays attention when she is on TV. Last weekend, she was working with a family who had a daughter who was almost five years old. Super Nanny was apalled that this little girl could not wipe her own butt ... and she was still using a sippy cup. Okay, strike one and strike two against us, I guess!

About the wiping of the butt (stop reading now if this is too much information for your taste), we still wipe Mason's butt. Can a four year old really get his butt clean enough to not be throwing underwear in the trash all the time? Well, after seeing Super Nanny I was on a mission to have Mason wipe his own butt. So we taught him how to do it himself and wa la, he now wipes his own butt! Wow, nothing like needing Super Nanny to whip us in the butt!

Onto the sippy cup. Mason is fully able to drink from an open cup and has been for a long time. However, when we are home and he is playing around the house, or when we are in the car, he gets a sippy cup. It only makes sense ... sippy cup means no mess. I know, I guess this means that we now have to summon Mason to the table to have his drink. But the child wants a drink in his hand 24/7, so this is a problem. Maybe sometime soon, Super Nanny, but thanks for the advice.
Posted by Bethany at 8:02 AM 2 comments 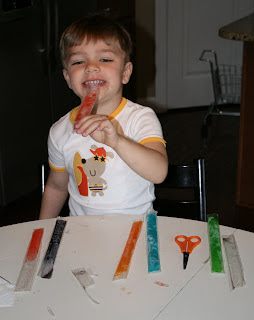 Leave your kid alone for 10 minutes and this is what you get.
Sort of reminds me of a similar time a little less than a year ago ... 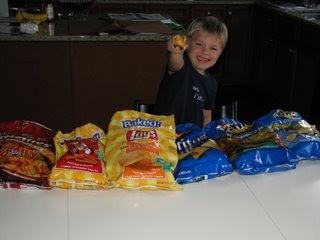 Email ThisBlogThis!Share to TwitterShare to FacebookShare to Pinterest
Labels: Mason (aka: Bubba) 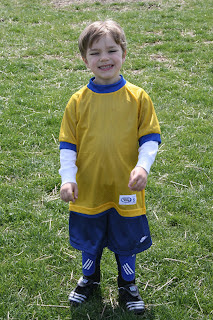 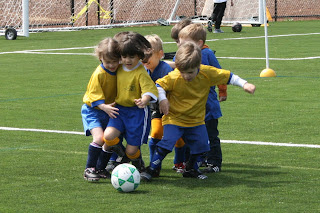 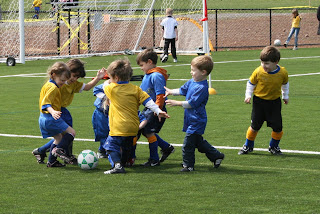 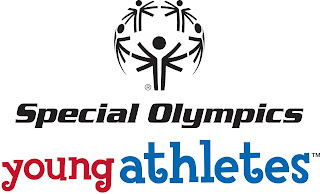 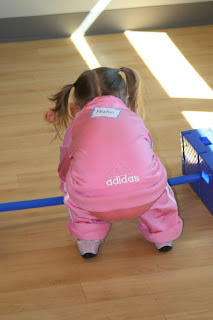 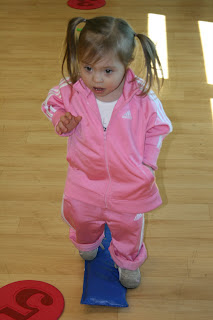 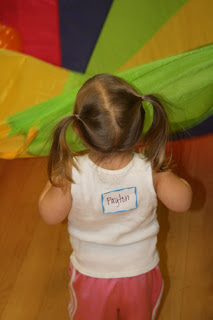 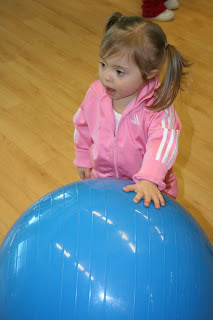 He can write his name! 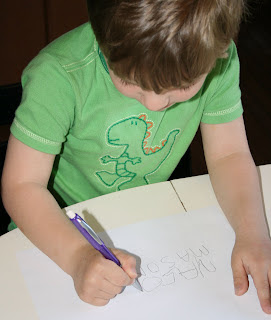 Over the past few months, Mason has been learning how to write his name. He has done so good and can now copy what we have written ... all by himself, with no help from us. He is so cute as he writes, he says, "Up. Down. Across. And up again."

I just wanted to post a picture of his progress ... 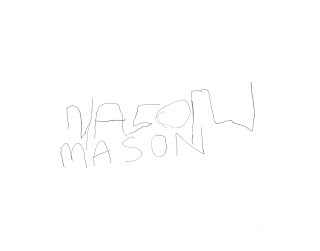