Mason is thankful for ...

Mason learned {I hope} what it means to be thankful for things last week at preschool. They did a few projects where he had to name what he was thankful for ... his dog was at the top of the list, which is pretty funny because he doesn't much pay attention to his dog. Sigh. 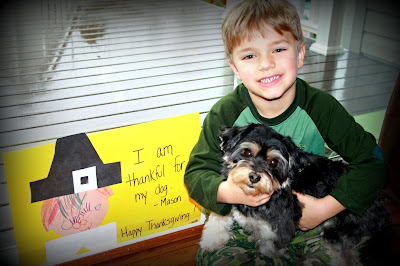 The other project they did gave him four places to list things he is thankful for ... and they are ...

His house
His new sister
His dog
Payton

I think he forgot about mom and dad! Geesh!
Posted by Bethany at 11:38 AM

Email ThisBlogThis!Share to TwitterShare to FacebookShare to Pinterest
Labels: Mason (aka: Bubba), thankful