On Christmas morning, I awoke to find Mason sleeping in our bed ... clearly he had come in some time during the night. He sat up in bed and said, "Wake up! Santa was here!" I asked him how he knew that Santa had come and he said, "Because it is Christmas!" I thought maybe he had snuck downstairs earlier without me knowing it, but I don't think he had. He proceeded to wake up his sisters and I made the kids wait upstairs until I could get the video camera ready ... mean Mom, I know. I finally let the kids come downstairs and they went crazy. Every other word out of Mason's mouth was "awesome" ... "awesome" ... "awesome". LOL ... it cracks me up because I'm not sure when he got so old. {Note to self: next time you want to video tape a moment like the kids coming down the stairs on Christmas morning, make sure you know how to operate your camera so you can make sure you are actually taping. Grr.}

The kids opened their stockings first and played a little bit with their toys that Santa left out. Mason was going crazy and wanted to open all the gifts immediately ... in fact if every gift could have been opened within 2.2 seconds, he would have been a happy camper. Nika was a little confused by the excitement and just kind of crawled around looking at all the loot and playing with the wrapping paper. This year was especially fun with Payton, now that she is old enough to be really interested in her toys ... she was so cute. 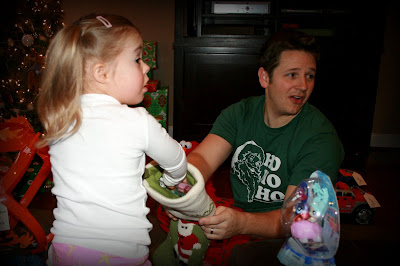 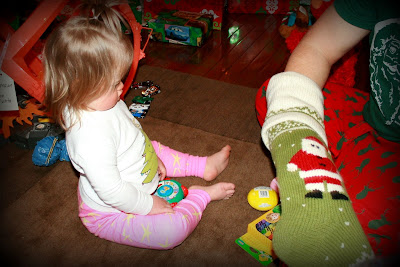 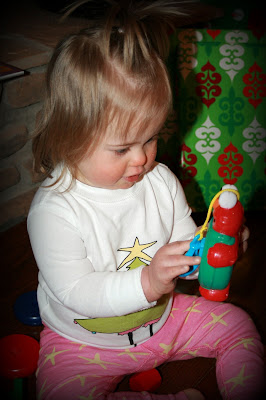 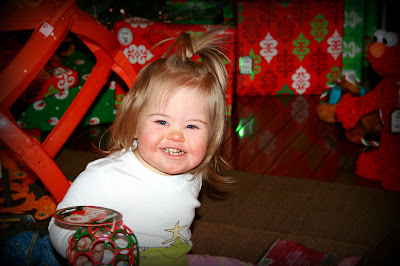 Mason and his stocking ... 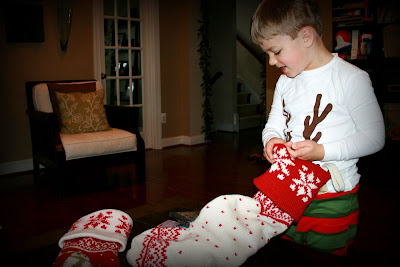 Chicky opening her Snugglekins Nursery from Auntie Shawn, Uncle Brian and Cousin Ethan ... you think she likes it? 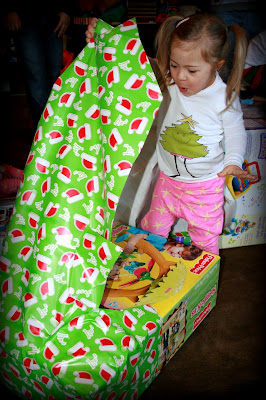 More of Chicky opening the nursery ... this pic cracks me up ... she was so excited! LOL 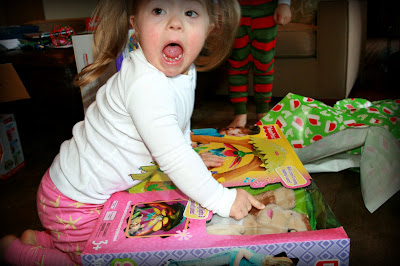 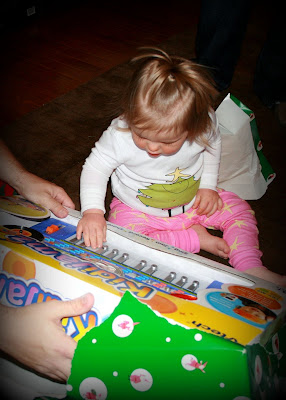 Nika loved this thing ... she eventually just laid on top of it. She has to hide it from her siblings, ya know! LOL 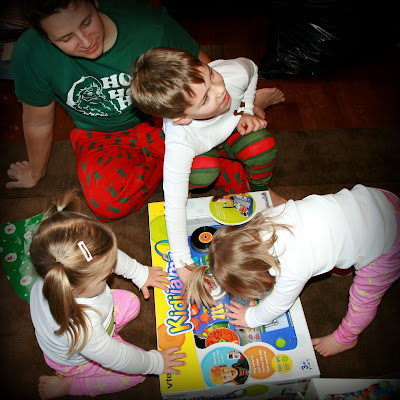 "Awesome! Just what I wanted!" 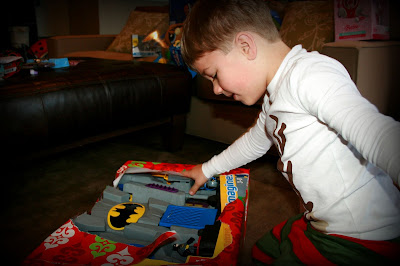 Payton ... I just love her reactions! 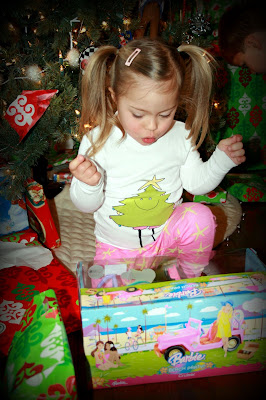 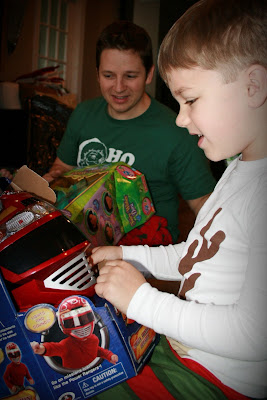 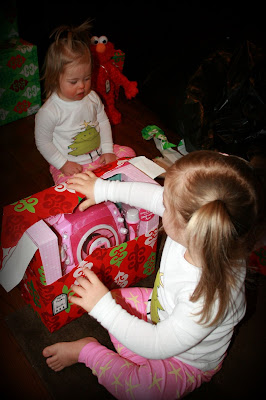 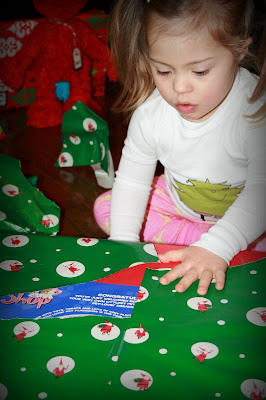 Nika loving on her wrapping paper ... ;) 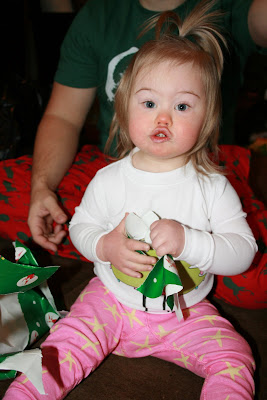 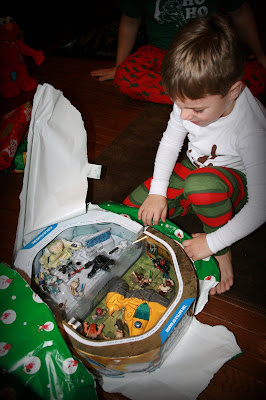 Payton's new truck. LOL. Story behind it is that the kids constantly fight over the big trucks. They love to zoom them around the house, so Payton finally got one of her own and her brother got one to match. Where can I buy a pink one? Haha. Nika will get one too as soon as she realizes how fun it apparently is to play cars. 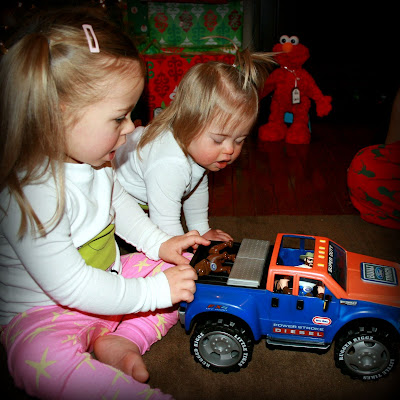 While we were opening our gifts, Auntie Shay, Uncle Jeremy and Cousin Jaxson came over. Jaxson looked so cute in his little Christmas jammies ... 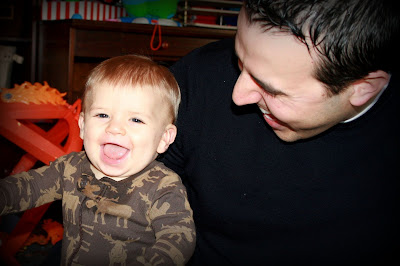 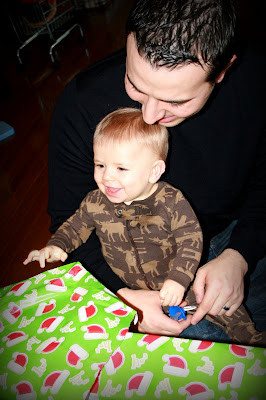 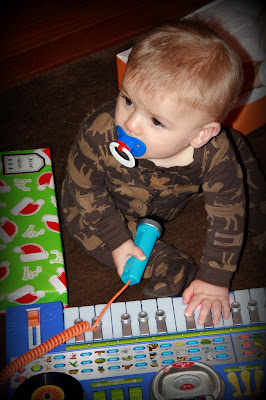 I guess opening all those presents got Payton tuckered out. Here she is resting on some of the Melissa and Doug stuff that the kids got from the other Grandpa and Grandma B ... 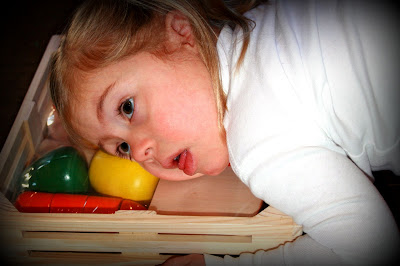 After awhile, Auntie Kristie, Uncle Casey and Grandma B {a whole other Grandma B ... LOL} joined us ... we had lots of toys to open and play with. Later on we cooked up a good dinner {ham, scalloped potatoes, 7-layer salad and rolls} ... 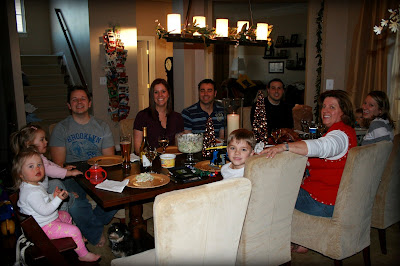