Payton had her three year well visit yesterday. She weighs 32 pounds and is 36 inches tall, putting her in the 60th percentile for weight and 19th percentile for height on a typical growth chart {there is a separate one for Down syndrome}. My little peanut ... I am pretty sure she has weighed 32 pounds for a long time. But at least she is getting taller ... I'm hoping that her increased activity is the reason her weight hasn't gone up. That sounds good, so we'll just go with that.

I discussed private speech therapy for Payton with our pediatrician. I otherwise never have much to talk to our ped about, only because we see {or have seen} so many other ologists ... cardiologist, gastroenterologist, otolaryngologist, ophthalmologist ... you get the picture. I got the name of a place that actually accepts our insurance {most private speech therapists don't accept insurance}, so we'll see. I have a meeting with her school on Monday to discuss the results of an observation that their ST did of her. The next step would be for them to evaluate her for one on one therapy, although at this point I'm thinking I want her in private therapy too. 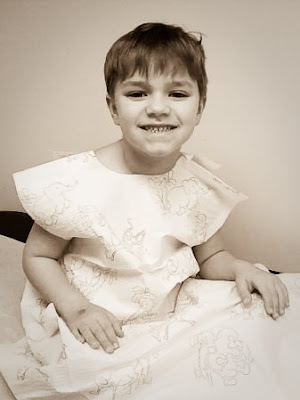 {I got a smile, but he was horrified having to wear this gown. LOL. Guess he is a big boy now! And he desperately needs a hair cut.}
Today Mason had his five year well visit. He weighs 56 pounds and is 46 inches tall, putting him in the 97th percentile across the board. The kid is huge ... always has been. They tested his hearing and did a quick little vision test ... he passed both. Urine test and finger prick were both normal ... if only I knew what they were testing for. LOL. I discussed behavior and hyperactivity with the ped, due to some small issues he has had at preschool during unstructured time. The ped said in light of the fact that he does very well with structured activity, she does not have any concerns about ADHD. Pretty much he is just a five year old little boy.

When I told Mason this morning that he had to go to the doctor, he asked me if he'd be doing anything else at the doctor. I asked him if he was talking about shots and he said yes. I told him I didn't think he would be getting shots ... I honestly though he was done after age four for awhile. Ha ... shows how much I know. Mason was not a happy camper when he learned he would be getting four shots ... in his legs. He did okay ... after a few lot of tears and four pokes, we were off to Target to buy a toy. How do I get suckered into that every time?

The dentist. All three kids have seen the dentist over the past few weeks ... here is the low down ...

Mason ... Lower front two teeth are loose ... prepare for them to fall out soon. Who knew? Xrays show short roots in upper two teeth ... dentist asked me if he had ever fallen on them. Umm ... he is a boy. I'm positive he has at some point ... probably more than once. Apparently when you fall on your teeth and sort of injure them, the healing process causes the root to shorten. Long story short ... after his top two teeth fall out, it will take a little longer for the adult teeth to come in. And the best news ... no cavities!

Payton ... Fought like a hawk. Surprised? She basically was restrained by me for her entire cleaning. Her teeth look good, although we are still waiting for both of her lateral incisors on the bottom. There is a very good chance there just is no lateral incisors, and that is okay.

The other concern is her canines on the bottom ... they are pretty much like shark teeth. Check these babies out {sorry, I don't have many pics of her mouth to choose from} ... 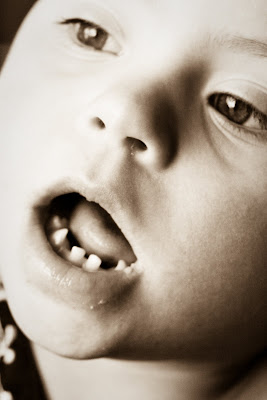 The concern is that they are angled in and they are sharp as all get out. Often times, this will cause a callous on the tongue. Lucky for us, it hasn't done that yet. But, she does usually bite her tongue if she falls. I asked about having them filed down ... and the dentist was game. But given her lack of cooperation, we decided to wait to see if they become problematic. Dang teeth.

Addison ... Dentist said her teeth look good, especially for going two years with no brushing in Russia. She has been awesome in letting us brush her teeth. We are still trying to toughen up her gums, but I'm told that will come. I have been concerned that perhaps her bite might be off due to her finger sucking, but the dentist doesn't seem much damage. Nonetheless, she wants us to distract her from the finger sucking as much as we can. We don't typically let her suck her fingers during the day. When she is sleeping, it is hard to prevent, although we've tried putting a sock on her hand. Sometimes it works, sometimes it doesn't. My main concern is her doing damage to her mouth ... well, and her fingers which happen to look like the fingers of a 90 year old woman.
Posted by Bethany at 3:27 PM

Email ThisBlogThis!Share to TwitterShare to FacebookShare to Pinterest
Labels: dentist, doctors, down syndrome